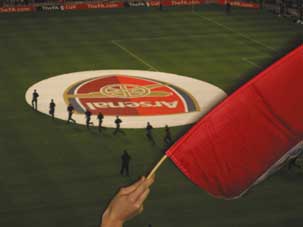 Yesterday I was at the FA Cup Final in Cardiff. It was fantastic, the roof was shut and the noise of the crowd was deafening. The atmosphere was great with the Southampton fans really going for it; loads of face paint, ginger wigs and yellow and blue. The best thing of course was that that Arsenal won, there is nothing like that moment when your team lifts the cup. So despite the missing players and the match reports it was a really exciting game and Arsenal played with a real determination. The brilliant Thierry Henry was deservedly voted man of the match and did everything save score, a privilege that went to Robert Pires.