It is time once again for the St Martins' MA Fine Art show. On until Wednesday 10th it is an eclectic mix of stuff a lot of which has a slightly dry conceptual bent. The undoubted highlight is Alex Michon's Billy Fury / Momento Mori which can be found on the ground floor. I do I'll admit know the work very well (and have written a little piece about it which you can find below) but it still shines out like a beacon amongst the mish mash of over thought, academy pleasing trash. It is also worth checking out Nicky Magliulo's video provokedly titled Elton John Is A Cunt .


Alex Michon’s Billy Fury, Memento Mori is a drawing space, a wholly inhabited fantasy world spun around the pivotal axis of the English 50s pop icon Billy Fury with a Jean Genet prison cell sub plot. These references are Michon’s own personal inspirations and knowledge of them is not essential to an understanding of the work, it’s the infectious, obsessive space that the work puts you in that is its point.

Billy’s early death was caused by a congenital heart defect and this vulnerability is friable in the heartfelt scratched out drawings which cover every wall surface of this miniature gallery /cell. Nostalgia is the hook but it is not the ultimate point, this is compulsion and obsession, a need to make work and breathe life into a world that would otherwise lie dormant.

In 1688 a physician from Muhlhausen called Johannes Hofer proposed that the term nostalgia should be used to define the medical condition of homesickness. ‘So that thus far it is possible from the force of the sound Nostalgia to define the sad mood originating from the desire to return to one’s native land’ (1). Michon’s work evokes this original definition of nostalgia in so far as we feel we know this/her world and whilst viewing it we want to be part of it.

Whilst creating a new work /world, Michon in the mould of Sybil, Christine and Eve White adopts another personality, she lives in another world, which is in this case the Denmark Street, Tin Pan Alley of Larry Parnes and his stable of stars. Billy’s world becomes intertwined with the homo-erotica of Jean Genet’s Our Lady of The Flowers as the low camp of hundreds of twinkling fairy lights illuminate butt smoking Indians and winsome bequiffed boys.

Memento mori are reminders that we will one day die and were a devise often inserted into 14th Century paintings (2). Pop stars have a unique position in modern society in that they are worshipped, identified and empathised with, their every move is something we can live through -“There were people whose interest in Maria Tambini seemed to rise with her decline. Over the years she had uncovered an audience who were attracted to her suffering” (3). Their failings and frailties are our own modern day memento mori.

Memento Mori/Billy Fury is a reminder of the frailty of the individual as they expose everything of themselves to a hostile world / institution. It is affecting, touching and courageous. 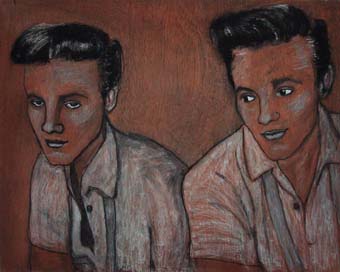