I'm very excited because I've been called a "shadowy 'gallerista'/Svengali" this is an image that I may cultivate.

Excitement is building at Transition about our forthcoming Stella Vine show Prozac and Private Views . What it will contain is at present a closely guarded secret but watch this space as details may gradually leak out. Her new work is as fresh and edgy as ever with works such as this new version of Rachel 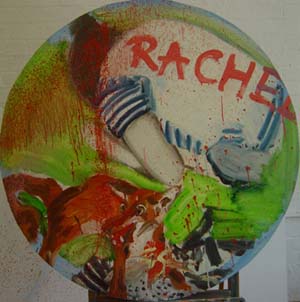 I went to see lots of art last week -
Becks Futures at The ICA .... Lame
El Greco at The National Gallery .... Good but too crowded
In-a-Gadda-Da-Vida at Tate Britain .... Overwelmingly busy but ultimately cliched and empty.
Also heard Sarah Lucas in conversation with her gallerist Sadie Coles at Tate Britain which was enjoyably inarticulate and stilted. I've never been much of a Lucas fan before but I enjoyed this. I hadn't realised the extent of her nostalgia for her seventies childhood, evidence of which is found in the Spam, Fray Bentos pies and Charlie George filled content of recent work.