Yesterday I went to a symposium at Tate Modern about Independent Art Publishing. It was actually quite good especially the fantastic Michael Bracewell who spoke about the eighties and their importance in fusing mainstream and independent cultures. This was the second time in a few days that I had heard the name Kathy Acker. Bracewell put her forward as someone who has been unjustly forgotten - an eighties embarresment. The day before the artist Esther Planas mentioned her as being the most important influence on her work, especially the book Blood and Guts in High School which she discovered when she first came to London. Esther also pointed out that Tracey Emin's work owes a huge debt to Acker.

Also at the Tate thing were Matthew Higgs (the chair) who showed us a photo of himself at 14 in the same room as Joy Division (very impressive) and the amiable Sina Najafi the editor in chief of the American magazine Cabinet. There is also a Bookworks book called Put about that deals with the same stuff. The cover of the book shows the famous Mark P thing about here's a chord...now start a band. I had always thought that this was in Sniffin' Glue but I can't find it in my Sniffin' Glue book and Put About just credits it to Mark Perry. If anyone has any idea where it was first published I would love to know. I'm particulary intersted because I have quoted it in a piece I've written in the forthcoming Arty: Greatest Hits which will be available soon from Transition and all good shops. The drawing of Twiggy below is from the cover. 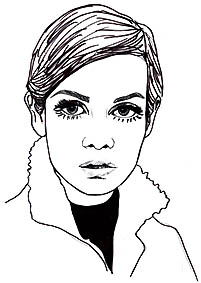 Back in the day lI used to work with Bernard Rhodes who was an enigmatic, extraoridarly revolutionary character, infuriating, creative, baffling and inspirational all at the same time.
He would often say things that would make me stop in my tracks would make me really THINK about things - one of the things I remember him saying was "Were are the kids getting their information from?" He was really interested in who had control over information and how it was imoportant to chanllege these channels - this my friends was way before the internet - but I think that this is one of the things about independent publishing - its a different channel of communication

I always thought that the Internet was like punk all over again - I guess I should know cos I was there both times round. My book 'The Man Who Invented The Internet' starts in 1976 with the Queen sending an email and then goes through punk to make the connection.
Anyway, here's something on the Sniffin Glue Chord thing:
checked my copy of England's Dreaming - Jon Savage reprints a photostat of the original fanzine on p279 -

No author is attributed.