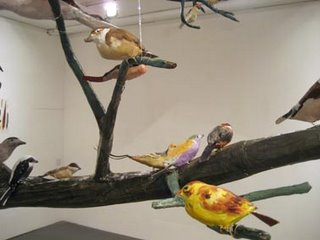 A new show has just opened at Transition - it is the second in the Supernature series and is Annabel Dover's Oriole: The Birds of the British Isles. The show features a papier mache tree full of cute plaster birds. The birds have a distinctive folk art look to them, they could almost be part of some elaborate rural ritual. Annabel is particularly interested in the folklore which grows up around the birds and has made a series of vivd ink drawings which highlight various bird myths. The whole thing is accompanied by the plaintive song of the nightingale (the nightingale sings to attract a mate, the better the song the better the mate). The Oriole in the shows title is an amazing looking golden coloured bird that stops off in East Anglia enroute from America. Apprently one of the ultimate audio experiences is to hear the Oriole singing at the same time as the Nightingale, this is something which happens very rarely because the Oriole generally arrives when the nightingale has finished its courting.
Posted by Cathy at 10:18 am

hey, I just got a free $500.00 Gift Card. you can redeem yours at Abercrombie & Fitch All you have to do to get yours is Click Here to get a $500 free gift card for your backtoschool wardrobe