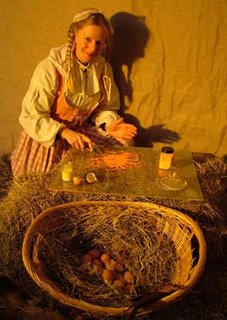 Mixing Paint and Pansies at Transition

It is going to be a busy weekend at Transition. On Saturday 11th November Paul Harfleet is bringing his Pansy Project to the gallery. He will be here between 2&4pm with pansies to give to people who want to mark sites of homophobic abuse. The project really seems to have captured imaginations, there is something funny yet moving about it. Feel free to come along

On Sunday 12th November between 1&5pm Sigrid Holmwood, whose show has been up for a couple of weeks, will be doing a paint making performance in sixteenth century clothes. It is all part of her fascination with re-enactment and later in the afternoon at 3pm she will be talking to Ruth Goodman from The Tudor Group. You will also be able to see Sigrid's hovel (based on a pigsty) that she has built in the corner of the gallery and from which she will be doing her paint mixing. Do not miss - it will be fascinating.

I will post images from both performances when I get them
Posted by Cathy at 5:36 pm