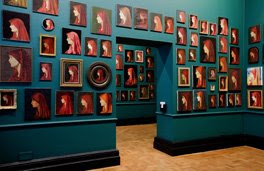 Fabiola
I saw Francis Alys' Fabiola way back in 1990 something at the Whitechapel and it made a real impression on me (it inspired my Mary Mary Mary Mary project). Fabiola has been added to quite considerably since then and is now on show at The National Portrait Gallery. Fabiola is the saint of abused women and nurses (I think). The one known portrait of her, painted in the late nineteenth century (and now lost), has been copied and re copied. Alys has collected a huge number of these copies from junk shops and flea markets around the world and it is these that make up Fabiola. The portraits vary considerably in style, competence and medium but they have the commonality of their subject to bind them together. The majority of them have Fabiola in profile her head covered by red fabric. This sea of red looks amazing against the turquoisey green of the walls in the rooms that the portraits are installed in. I love the aesthetics of the piece and there is something quite moving about it - all that time and effort by all those people. There are many other points that the work brings up but the outstanding issue is that people have felt that they need to create their own versions of this saint - they could easily have bought copies.
Posted by Cathy at 10:10 pm