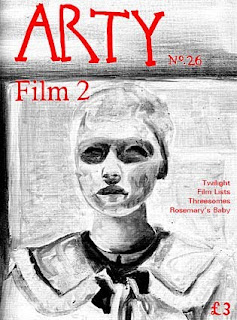 Arty Film 2
There is a new issue of Arty out this week featuring one of my Rosemary Woodhouse's Wardrobe paintings on the cover. I've also written a piece about the project which is all about the 50+ outfits that Mia Farrow wears in Rosemary's Baby. It all seems amazingly topical now with Roman Polanski's arrest in Switzerland - strange how these events happen.
It's Arty's second film issue - the first was Arty 6 back in 2002. It has all the eclecticism that you would expect from Arty and as well as Rosemary it features Film threesomes, Twilight, films depicting American presidents and lots more. It will be in the shops at the end of the week or you can buy it here
Incidentally I have just come across an Arty usurper online. It seems that there is a Brighton based magazine calling itself Arty. I have mailed them to let them know that we already use the name (they started last year, we have been around since 2001). Not quite sure what to do next... Anyone have any copyright advice they can give me?
Posted by Cathy at 8:08 am