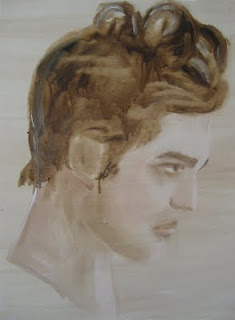 Heart Throb
I'm currently putting together a show called Sehnsucht which opens this week at JT Project 09. It's about what could be described as the dark secret that we all hold inside, the thing that just to think of is thrilling.
My work for the show is a series of paintings of a brooding young man. They are made from the same image and although initially they may appear to be identical they all have their own hand made foibles. The series is called Heart Throb and some of the names of the individual paintings (of which there are 10) are Byron, Elvis, Shelley and Jim Stark.
Writing this description is complicated. I want to reveal the name of the image that inspired the series but to do this feels like a betrayal of a secret and to betray the secret is to risk destroying the thrill.
Posted by Cathy at 6:52 am

thanks for posting this. looking forward to seeing the exhibit. I guessed right!

Hi Cathy, I was at the free art fair this weekend and fell in love with Man Mask, a long shot I know, but do you sell prints of it? Many thanks, Coryanne

Cathy
I won Mask Man @ Free Art Fair. I am highly delighted and very grateful. Many many thanks. Chris

Hi Coryanne
Thanks for your nice comments. I am afraid that I don't have a print of Man Mask but glad that you liked it. I do have some work on show at the moment in Transition's Sehnsucht show at JT Project 09 if you are around in the East End over the next few weeks - see the links above
Cathy

Hi Chrisnword
Am glad you are happy with your Free Art Fair booty.
Cathy

Cathy, I have made a note of the event. The next few weeks are manic for me, mother of 3 under 5, but will try to visit, I have seen some of your other works and really like them. I am hoping that Santa will visit the event and put on in my stocking. Al the best, Coryanne
By the way, do you have a subscription email that I could join that gives info on your events?

Hi coryanne - Hope you manage to make it along. If you send an email to info@transitiongallery.co.uk asking to be added to the mailing list you will get mails about all my stuff and also things I do with the gallery and our publications. thanks. Cathy