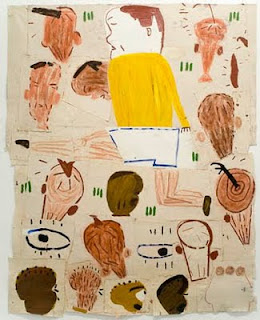 Rubbernecking
Rubbernecking the new show at Transition is all about paint. Jake Clark instigated the project and came up with the title and the other participating artists. The basic idea is that it is all about a different, slightly cartoonish way of looking and how this relates to painting.
One of the participating artists Rose Wylie (the others are Jake Clark and Phillip Allen) is showing some unstretched collaged canvases of footballers - for some reason this makes me think of Walter Sickett who in his later years painted stuff from pictures he saw in the newspaper. There the comparison ends though because these have much more in common with Guston than Sickett. I absolutely LOVE the fact that one of them is actually of Wayne Rooney (see the picture above which by the way was taken by Damian Griffiths who is currently showing work in Transition ShopSpace)
Posted by Cathy at 12:40 pm

This show was almost as good as one of my own.

hmm... do i detect a note of sarcasm

it was a good show