The House of Fairytales - Exquisite Trove at The Newlyn Gallery

As promised here is my 'Cornwall Part 2' post. Usually when I visit Penzance and Newlyn in the summer there is a group show by The Newlyn Society of Artists on at The Newlyn Gallery and I have just missed the show that I really wanted to see. This year however I managed to be there for the first day of the new show.

Exquisite Trove is a touring show (it was previously at The New Art Gallery in Walsall) but it takes on a different form in each new location. In Newlyn it mixes objects from local museums with artist made and collected objects displayed in a series of wunderkammer. Although the show as a whole is a little confusing (and I am not a fan of the series of House of Fairytales screen prints by famous artists) it is also very intriguing and I think more than fulfils its remit of stimulating imaginations. The whole thing is set up as a series of weirdly connected objects that invite the viewer to make connections - so there are chastity belts, two headed crows, whips, sparkly dance shoes, tiny gloves, castings of Turner Prize nominated artists' fingers (you get the picture it is very eclectic).  Different artists such as Cornelia Parker have curated the show - I imagine they had a cabinet each - and this means that there are lots of different ideas going on.

This was my favourite cabinet - not least because it contained a sash from Miss Constantine Junior and Rachel Cattle and Steve Richards cardboard Same Old Scene single. 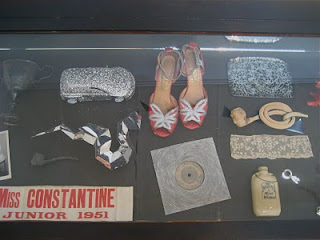