Mixtapes and How Music Saved my Life 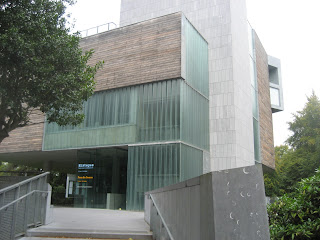 Just back from Cork where I was doing a talk at the Lewis Glucksman Gallery to accompany their current show Mixtapes: Popular music in contemporary art. The gallery is an absolutely beautiful modern building nestled amongst trees, by the river Lee on the University College Cork campus (although the riverside location does have its downside as the building was flooded last year). Mixtapes was curated by Matt Packer and Chris Clarke and is a really interesting selection of iconic and lesser known work around the subject of popular music with a particular focus on fandom. I enjoyed seeing Jim Lambie's glitter encrusted record decks; David Blandy's zines, record sleeves, posters and films; Sarah Doyle's delicately animated gyrating dancehall girls and Anne Collier's atmospheric photographs of record sleeves. I also watched a good part of  Dan Graham's Rock My Religion which was a new discovery for me. Made in 1982-4 it is a roughly put together video-essay which examines the way that our obsession with popular music comes from ceremonial rites and spiritual revelation. I love the clunky look of it, the use of found footage and voice over and it features Elvis's Tupelo concert which elevates it to the iconic for me. I throughly recommend a look if you haven't seen it.

My talk was part of a series called How Music Saved my Life. I focussed on how my formative music experiences of singing in a band, doing John Peel sessions and the whole diy culture of recording and making zines have influenced my art practice.

I had a few hours checking out the rest of Cork before I had to fly home. It has apparently been voted the twelfth best city in the world by Lonely Planet and is a very compact, pretty and buzzy place. Lots of bars and shops and a nice more traditional gallery called the Crawford, there is even a Depeche Mode themed coffee shop called Cafe Depeche.
Posted by Cathy at 9:44 am

Cork and the surrounding area is a great place. Is the exhibition moving elsewhere as it would be interesting to see some of the art work? Especially interested in Sarah Doyle's and Anna Collier's work. There was a piece at the Saatchi recently that had LP sleeves with only parts of the images left unpainted.

As far as I know it isn't touring which is a pity as it is a really good show. I saw some pieces where LP sleeves had been painted over leaving only hair - quiffs , beehives etc visible at Frieze earlier this week - they were on the Jack Hanley stand and are by Ajit Chauhan - sounds like it could be the same work.

Oh please do a post and tell us about the Peel Sessions!?!?

(I am major devotee with signed postcard from the great man and huge digital archive...)

Also , talking of record sleeves/art - do you know George Condo's 80s-90s work? - Did loads of paintings including whole LP sleeves (mainly jazz as I recall...)

Well CAP I can't resist a request like that...
I wrote a piece about the whole John Peel thing for a zine that accompanied a show I was in called 'For Peel' curated by Harry Pye a few years back. Might post that if I can find it