The Count of Monte Cristo

The Count of Monte Cristo was completed by Alexander Dumas in 1844. It is the ultimate adventure novel with all the plot twists that you could ever wish for. There have also been lots and lots of films and TV adaptations of the story - all of them very different. Because it is such a huge story there are numerous plots to pick and choose from and each film goes its own way - different romances, endings and deaths.

I have an interest in all things Monte Cristo at the moment because I am taking part in a couple of 'Monte' themed shows at Phoenix Art Centre, Exeter & Rogue Project Space, Manchester in April / May. My contribution is a series of paintings looking at how moments in the plot and characters have been depicted over the years. This painting is of the sometime Arabian, sometime Turkish, Princess Haydeé as seen in 1961's Le Comte de Monte Cristo. 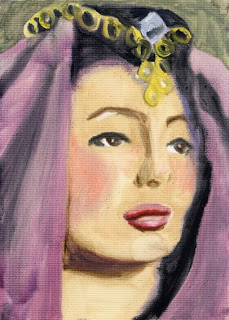