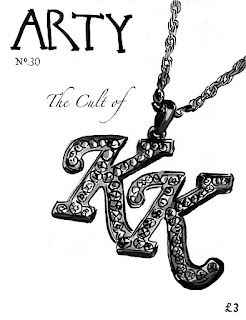 Arty was first published in 2001 with an A5 photocopied and stapled issue featuring rioters wearing Mark Jacobs shoes on the cover. Friday 13 January 2012 saw the launch of Arty 30 alongside Hayley Lock's show (Now that would be) Telling: Caddington Hall at Transition Gallery. The zine is a little bigger than issue 1 and has been litho printed but it is still black and white. The theme of the new issue is The Cult of KK - KK being the American artist Karen Kilimnik. Kilminik's work is all about escapism  - Versailles with a touch of heroin chic, the hammer and sickle flying above the Tzarina - you get the picture. So really not far removed from the glamourous rioters of issue 1.

I have been thinking a lot about now and then. When I watch an old film I am struck just as much by its relevance as by its obsolescence. Things change less and more than we think - all at the same time. I think we get hung up on the look of things - outmoded materials, technologies, techniques, language, styles - the surface that makes films, photos, objects, books etc seem different and old. But the essence, the story, the way that people act is usually completely relevant and consistent. The look of things however does change alarmingly fast, making an image or object from 5 years ago look strange and of its time.

Back to the 10 year old Arty 30 - everything has changed and yet it has stayed pretty much the same. This is all quite fitting in an issue about Kilimnik. Her playful mixing up of everything that appeals to her could be equally applied to Arty. The issue features a number of texts about her work by long time admirers and new devotees as well as fiction, images and even a letter from the lady herself. Kilimnik does of corse repel as well as attract and there are many people who can not stand her whimsy. I am sorry if you are one of these people because you are missing out - there is no other artist quite like KK.

Independent publishing is not a money making exercise and if you admire, respect or enjoy Arty can I please encourage you to buy or subscribe. Its available online or in lots of shops and only costs £3. Without this support Arty will become a museum piece. If you want to know a bit more about Arty there is an interview with me by Teal Triggs in a feature called Smells Like Zine Spirit in the new B Magazine (Issue 5).