I've been back from Rome for a month or and am only just starting to process all the information that I took in during my time there. So I thought I would make an inventory of sorts of the 'Rome' films that I have watched and how these connect to my experience of the place. For convenience and coherence I am going to divide the films into the decades that they were released, so this first 'Rome Films' post is about films from the 1940s. One last point before I start is that this is a very subjective list of films and there will of course me many missing either because I haven't yet seen them or don't know them.

The 1940s marked the amazing rise of the Italian film industry from the ashes of the devastation of WWII. This is of course the start of Italian Neorealism, a movement which used its lack of resources to define its aesthetic. The first film on my list is maybe the most famous Neorealist film - Rome Open City (Roberto Rossellini, 1945). Neorealism dealt with real things happening more or less in real time in the places that they happened. Rome Open City was released the same year as WWII ended and is about Italian partisans in Nazi occupied Rome towards the end of the war. It was mainly shot on the streets (this was partly through financial necessity) and featured many non-actors alongside stars such as Anna Magnani. Because of the scarcity of film stock Rossellini had to use whatever he could get his hands on resulting in a lack of stylistic continuity. Similarly film equipment was hard to find and I have read that old-style monolithic silent movie cameras were used. This meant that the sound was added later causing the strange disconnect that is often apparent between the actors and their speaking, something that is a bit of a trademark of Italian film.

While in Rome I visited the Museo Storico della Liberazione in via Tasso which during the Nazi occupation of Rome was the headquarters of the German SS and members of the Resistance were tortured and interrogated here. I am sure that I have read that it is the location used for the torture scenes in the Rome Open City but I can't find the reference now, nevertheless if not the actual location the cells graffitied by condemned prisoners are a direct inspiration for the scenes in the film which are really harrowing.

The film itself has not aged brilliantly and the melodramatic drug addicted showgirl plot line and the odd comedic moments seem a bit ill judged and at odds with the film's tag as the forerunner of Neorealism. However there are some very memorable scenes, notably Anna Magnani running at full pelt down the street after her fiancee who has just been arrested by Nazis screaming 'Francesco, Francesco, Francesco'. I originally watched the film in 2012 and this is the Film Diary painting I made of one of the dramatic moments towards the end of the film.

The second film on my 1940s list is another Neorealist classic - Bicycle Thieves (Vittorio De Sica, 1948). This is a more cohesive, less melodramatic film than Open City and for that reason is a better example of the Neorealist idea. It has a very small plot, one that is pretty much covered by the title of the film, and is more about the struggle that many people had to survive in post war Rome. It is also very sad and for this reason I couldn't bring myself to watch it for many years.

There are are a series of posters around the city at the sites where famous films were made, in true Roman style most of these have been defaced and now like much of the city are in a dilapidated state. I became a little obsessed with finding and photographing these. The Bicycle Thieves poster is close to the huge, thundering tunnel (Traforo Umberto 1) where the hapless Antonio chases after the thief who steals his bicycle. 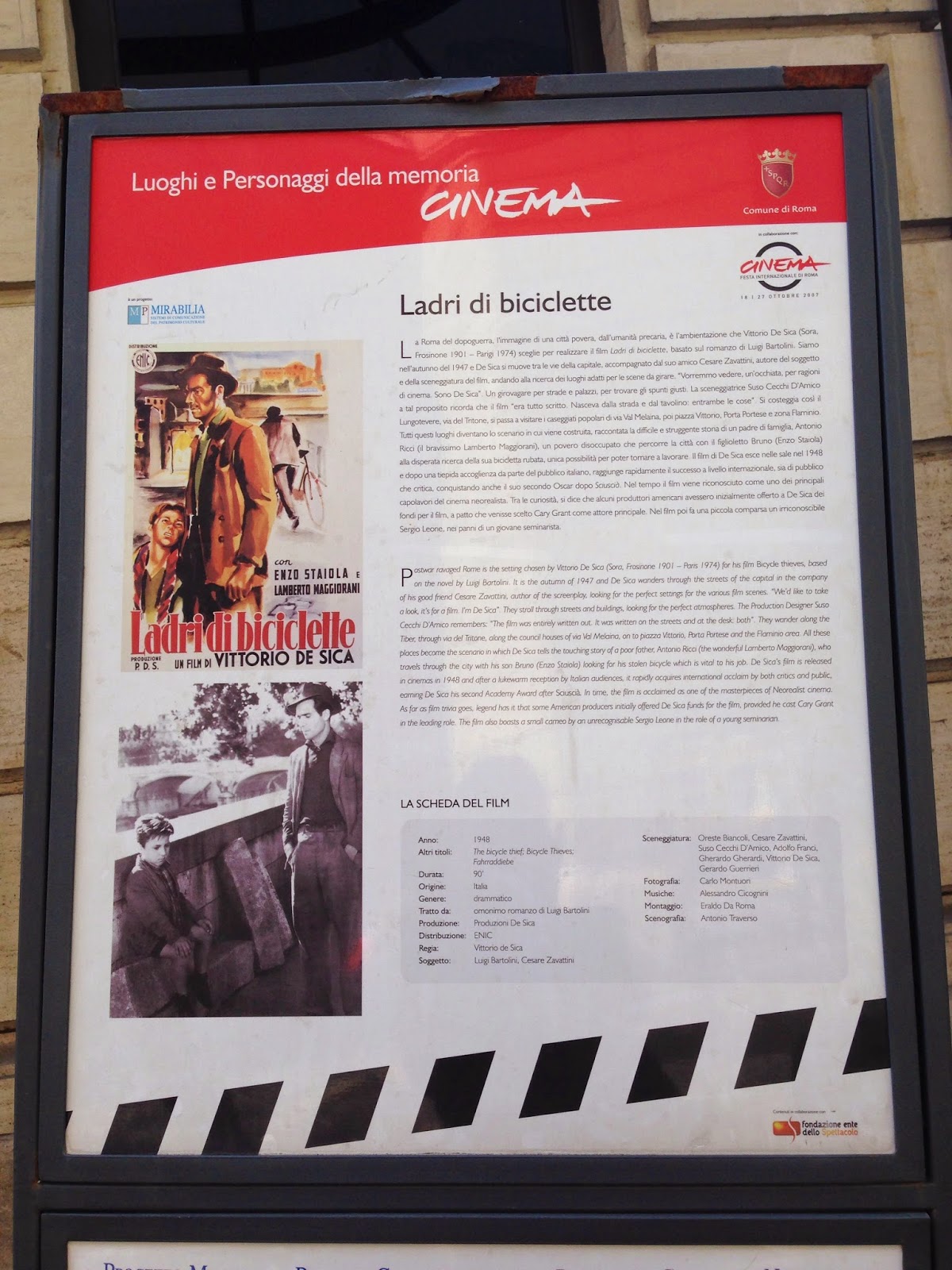 I walked through the tunnel a few times, as part of a film inspired walk from the via Veneto to the Palazzo dell Esposizioni to see the excellent Pasolini Roma exhibition (more of this in a future post). On one occasion a group of chic, motorcycle riding, Italian police screeched through the tunnel and the last cop in the group somehow slid off his huge bike. Immediately a huge crowd of people rushed to his aid, I think he was more embarrassed than hurt though as he quickly climbed back on and caught up with his mates (no pictures I am afraid - I was too shy and a bit worried about being arrested for mocking the police or something).

One of the strengths of Bicycle Thieves is the relationship that Antonio has with his young son Bruno, who dotes on his father and seems to be constantly trying to make eye contact with him. When Antonio chastises Bruno and Bruno's ultimate  realisation that his father is not always honest are some of the most heartbreaking moments in cinema history.

I won't go any deeper into Neorealism in this post but if you are interested my 2012 essay 'The Stylistic Features of Italian Neorealism' has a lot more info, especially about Visconti's early films Osessione (1943) and La Terra Trema (1948).


Postscript
Thank youth Jacopo Benci for the following info : 'Via Tasso was NOT the location used for the torture scenes in Rome Open City, Rossellini filmed in a large basement in Via degli Avignonesi, near Via Rasella, but the set of the Nazi HQ/prison was indeed based on recollections of Via Tasso.'

Hi. I really enjoyed my brief visit on your site and I’ll be sure to be back for more.
Can I contact your through your email?

Please email me back.