Blue is the colour

The Drawing Room’s three-person exhibition, DE.FI.CIEN.CY is built around the work of the long dead and fashionably obscure Andrzej Wróblewski. But of course most visitors will be there for the star of the show - Luc Tuymans.

Over at the Turps Gallery the inaugural show, Tutti Frutti, featured the work of 14 painters. Any connections between the artists, apart from a shared interest in paint, are pretty much accidental because they were independently selected by three artist/organisers, without a theme in mind aside from that suggested by the show’s title which literally translates as ‘all the fruits’.

I went to artists’ talks at both of these non-commercial spaces and it set me thinking about galleries that concentrate on individual media and the practitioners that are loyal to the spaces. 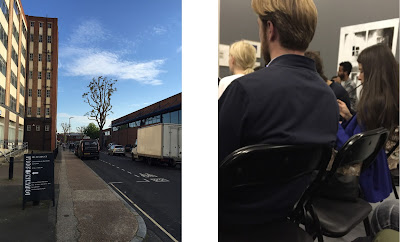 At DE.FI.CIEN.CY Tuymans in conversation with the show’s curator, Ulrich Loock told us that if there was a book to go with the show, which also features the work of Rene Daniels alongside Tuymans and Wróblewski, it would be Raymond Chandler’s Long Goodbye – a fitting choice as the show has the noirish atmosphere that seems to epitomise Tuymans oeuvre. Tuymans was mostly his taciturn self only becoming illuminated when he talked about popular references such as his drawing of a flying monkey from The Wizard of Oz. One of the more interesting discussions was about blue, a preeminent colour in the work of another Tuymans favourite, fellow Belgian, Léon Spilliaert. Loock encouraged Tuymans to explain his own connection to a colour, which could be seen as another manifestation of his downbeat Belgian ness. Tuymans explained that when he was young he could only paint in his studio at night and the yellowish artificial light meant that his work generally had a bluish tinge to balance the colour.


And what about drawing? It has, says Tuymans, a sense of decisiveness because unlike painting it cannot be changed and subsequently the painted line has a very different quality to the drawn line. Because of these differences Tuymans prefers to exhibit drawing separately from painting, unlike other artists (such as he somewhat disapprovingly noted Marlene Dumas), who are happy to mix them up. My struggle with this magnanimous idea about drawing and painting is that to all extents and purposes the drawings on show in DE.FI.CIEN.CY are, as far as I can see, only drawings because they are on paper. They are mostly made with paint. But maybe this is a minor detail. Other little nuggets of Tuymans info that I gleaned were that he considers the Arnolfini Portrait the first conceptual painting and that shadows are very hard to paint because they are non-colours.

And so onto the Turps gallery, the latest addition to the Turps Banana empire, which recently opened in a defunct South London estate alongside the Turps Art School. Marcus Cope led a discussion with a number of the Tutti Frutti artists, co organiser Katrina Blannin and an engaged audience of painters.

Kaye Donachie, best known for loosely painted depictions of women, talked about her Tutti Frutti work which rather than a painting is a cyanotype on canvas. A cyanotype is a basic photographic process using a light sensitive chemical, the resulting image, as suggested by the name, is always blue. Donachie’s desire to ‘paint with light’ led her to the process and the resulting work has, it was noted, the quality of an animation. One audience member wondered if the resulting image always had to be blue – the answer I think is in the name. Printing it seems is very much in vogue with painters. Nick Goss had also included printed sections in his large work, which was inspired by glimpses into the Turkish Sports Clubs around his Green Lane’s studio. His and Donachie’s mix of figuration and abstraction is very prevalent in contemporary painting – and maybe this desire to get away from a too literal reality while retaining some of its structure explains their experiments in print making.

Artist Erin Lawlor said that too much intention kills her gestural abstract works and that she was always waiting for the work to ‘surprise’ her. Many painters believe in the power of happenstance which explains why they so often struggle with concept driven mainstream art education, which can seem to kill the spontaneity that is thought to be so important to ‘good’ painting. It is certainly true that the creative process involved in painting is hard to quantify and for this reason it does seem to be at odds with much of the cerebral art world. Katrin Mäurich knows when one of her individually shaped wooden paintings is finished because it ‘looks like a little dance’. This esoteric, vague language has made painting an art school outsider. Which is why the Turps School is thriving. It has stepped in, knight in shining armour to save painting. But in reality state art education should be addressing painting in a more satisfying way and students should not have to resort to independent art education. I am not calling the ethos of the Turps School into question here but there will no doubt be other less scrupulous establishments opening up that rip off less knowing artists. We should all be campaigning against cuts in art education, as Bob and Roberta Smith are so commendably doing, or art as a whole will become a marginal activity.

The Turps Gallery, we were told by Katrina Blannin, is there to fulfil a need that is unaddressed by other galleries – it is a place for painters to put together painting shows. I have reservations about limiting a gallery to one specialism, but it seems that there are plenty of takers for this form of exhibiting. The Turps Gallery grand opening attracted over 400 people to the modestly sized space, so separating painting from the rest of the artworld is obviously popular, but could it also be dangerous? Not giving painting the chance to connect with other media and taking it away from the conceptual, could well result in the confirmation that painting is the irrelevant and reactionary medium that so many art school tutors have told us that it is. I for one want to stay connected to ideas and don’t want to be painted (or drawn) into a corner.

I think some specialisation in galleries is useful - for instance just two-dimensional works on walls simplifies lighting and wall or spatial options. For video and installations, it's harder to cordon off or differentiate works (for noise say or standing room) which may be welcome in some cases but annoying in others.
I think because the art world offers such a range of materials or mediums, some specialisation is welcome, but I'm not sure I would want it to be exclusively paintings, - only begging the question of when is a drawing a painting or prints a painting? for instance, but I'm happy if performance or installation people have dedicated spaces and the various facilities these might require.