Fell in Love with a girl (and a boy)

Went to see the White Stripes on Tuesday at Ally pally along with 7,000 other people. I must admit that this is the first gig I have been to for a while, and I’d forgotten that whole thing about not being able to see because someone really tall stands in front of you! Anyway despite this small quibble it was great. I was reading in the paper today a kind of exit vox pop of the gig and the general opinion seemed to be that he (Jack) was a fantastic guitarist but that she (Meg) was rubbish and only had a very limited repertoire of drum beats. Someone even suggested that a few more people in the band would improve things. STOP. How can people be so stupid? If Meg were drum soloing all over the place the whole thing would tumble over into the wrong side of ‘70s prog rock. The simplicity of her beat is essential. Also the whole fantastic duo, sister / brother incest thing is a vital component (as is Meg’s rather bizarre one arm drumming, one arm on hips stance). Some people are appalling, it really is like punk never happened, can people really just be concentrating on musicianship and ignoring the romance of the myth and the power of conviction. Anyway, it was a good gig, minimal, powerful, charged atmosphere, a little Led Zeppelin (who I have always hated but now have to admit that Robert Plant’s voice was interesting) a little bit Cramps and they even eventually played all their hits. 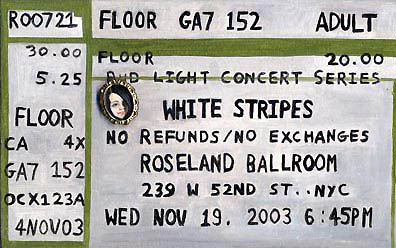 Of course I also meant to say that I went to this gig with my friend Paul who writes about it on his blog (I've been told that I have to do links like this as it is blogger etiquette)
Posted by Cathy at 6:19 pm