The new Hirst, Lucas and Fairhurst, Britart show at the Tate is named after a song by Iron Butterfly. This must surely be the final nail in the coffin of this ailing Cool Britannia bunch. They started off with their three minutes of teenage kicks and have ended up today with the lumbering carcus of a West Coast concept album. Sarah Lucas's wanking references surely say it all.

I must now admit that I haven't yet seen the show but the blanket coverage it has received by the unimaginative media makes me feel as though I have. I will go at some point and I may even write a proper review, then again I will probably write about something else that hasn't been fortunate enough to have dedicated PR people pushing it 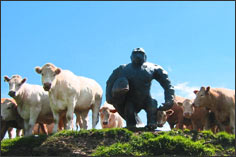 This Gorilla with its arm missing by Angus Fairhurst is my favourite thing from the show (from what I've seen so far). Although I've just noticed that in this picture by Maia Norman it still has its arm and is carrying something.
Posted by Cathy at 9:32 pm