I've managed to break away from my compelling studio practice to visit some shows, here are some thoughts

Brand New and Retro - Up Projects


At a new space in Wadeson Street (which I don't think is permanent)
This is a very slick and expensive looking show which doesn't necessarily mean that I don't like it.
A lot of the work is by people I know - Tanya Fairey's dreamy figurative paintings, Kirsten Glass's cut out and collaged fashion goth scapes and Luke Caulfield's paintings of disaffected youth, for instance. Other stuff is by well known names such as Douglas Gordon and Jim Lambie. There are also a whole lot of videos which I am ashamed to say I couldn't be bothered to look at. My favourite things were Peter Liversidge's white framed wall of drawings of old product logos and cardboard, Blue Peter-esque 3d Super 8 and instamatic cameras. I also really liked Jim Lambies red glitter encrusted mask made from underpants (I didn't know I Loved You Til I Saw You Rock & Roll) and Jun Hasegawa's wall of schematic women.
Overall though the whole thing feels a little jaded, the neat little catalogue lists the artists favourite books and films in the style of teen mags something which has been done before and with a whole lot more conviction. The whole theme seems very tenuous and can be summarised as work now which is influenced by the past ... umm yes. The pinning on of the fashionable bedroom artist /fan thing is an attempt at trendy coherence which just doesn't work.
I also felt curiously suspicious of the free copies of the appalling Art Review and the arts council funding (surely the arts council should be funding more ambitious projects than this) 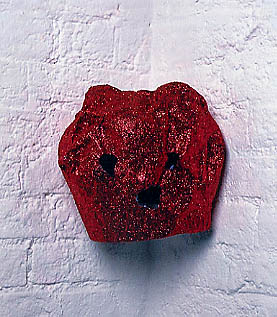 
I graduated from my MA at the same time as Raqib and his success is a source of great pride to us St martins' alumni (unlike Goldsmiths, The Royal college and Chelsea not many of us go on to greater things). This show features his trademark ornately decorated paintings. These ones are huge and must have taken ages. I hope Mario Testino has a lot of spare change if he wants one. They are enjoyable to look at but are very constrained and quite claustrophobic going against the very latest looser painting styles. I suppost they look like decorative things for rich people and would probably have benefitted from a little more rudeness (there were suprisingly few members on display). The works on paper are more interesting with their animal headed people. I still like the portrait of the queen from the MA show best though.

Boys Who Sew - The Crafts Council


I love the title of this show but it wasn't as great as it sounded. The work by Hugh Locke has been tamed and displayed in a provincial institutional style. My favourites are the pieces by prison inmates


I didn't really want to see this as I hated the photographs that I'd seen of the giant shoe but it was next door to Victoria Miro so I had a peek. This is a huge space and I feel very sorry for the poor invigilators as it is freezing. The best things are the haunting sound track and the free badges but all in all it is a bit of a mish mash. My friend Alex (that I went with) thought that she was going to hate it but really liked it so it has some merit