I have a new scarily teenage obsession in my life to fill in the Arsenal less summer months - The Libertines. Pete Doherty is a kind of cross between the self destructiveness of Kurt Kobain and the tunefulness of Beatles era Paul McCartney. Their music is powerful and catchy, think The Jam, The Kinks etc. etc. and best of all they have this real thing about Englishness. Albion, Arcadia, dead war poets and the like mixed up with a smattering of homoerotica. A Potent mix. Their live performances totter on the edge of falling apart and then come back together with all the excitement of that sex and drugs and boys in the band stuff. (I must confess now that I have only seen them live once but it was at The Cafe de Paris and it was brilliant!)
They have a new album due out soon produced by Mick Jones who has said that "a record as good as this only comes along once in a generation". Wow! The downside to all this is that Pete is at the moment holed up in The Priory trying to beat his longstanding on/off drug addiction. You can if you are so inclined follow his progress via his Babyshambles website where he posts rambling acccounts of his state of mind, the minuitae of his treatment and pleas to various fans to come and see him and bring him supplies of stamps! Look out for postings by Heavyhorse. 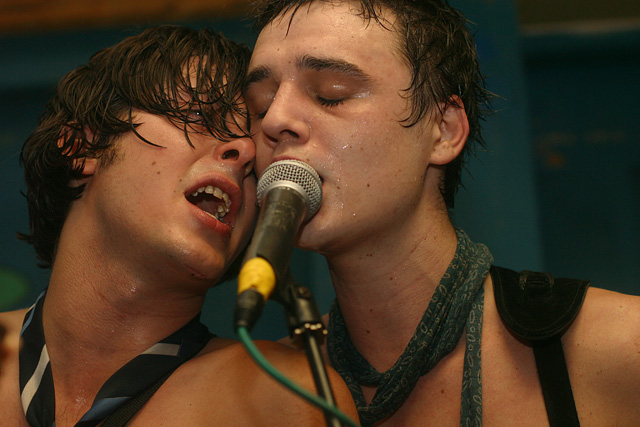 hi, it’s nicky that wrote the libertines piece in ‘arty’ (boys issue).. gotta withdraw my use of ‘homoerotic’ from my description of the great, great lib’s… bollocks to that!
Was menna film pete the other night, but he’s in a bad way and it didn’t happen which feels for the best right now…