Its been a very eventful week. On Thursday whilst I was invigilating at Transition someone came in and stole one of Stella Vine's paintings off the wall. I called the police who told me there was little chance of ever finding it and that was that. It seems crazy to me that a piece of art can be stolen and an image of it isn't circulated to specialist painting theft squads around the world, I mean that's what would have happened in the movies. At least The Hackney Gazette, The East London Advertiser and Flash Art have expressed an interest, so you never know.
The stolen painting was 41.5 x 33cm and called Kitten and was of... Kitten, the loveable anarchist from Big Brother. There have of course been numerous conspiracy theories including my favourite which is that Kitten herself got someone to steal it for her.
Stella has issued the following statement about the event:
"I am sad as Kitten was one of my favourite paintings, and also
because it had been promised to a young American couple, who had been
waiting for a painting for some time. I hope that whoever stole it,
stole it because they loved it, and not because of all the hype." 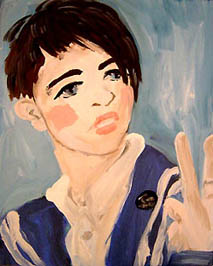 oh my god! that's really weird. I hope you find the painting soon. It's really funny how the majority of people in the world are so scared to even touch art and then someone totally abuses that by simply grabbing it off the wall! i guess it's flattering but still very wrong. Never a dull moment for Stella...I hope the painting is found safe and well.

Now back to my search for kitten manx nevada information!