Finally the Tate Modern have said yes to stocking ARTY GREATEST HITS. So on Wednesday I wheeled 20 copies in my trolley over The Millenium Bridge. If you don't have a copy yet shame on you, there is no excuse as it is available by mail order or from numerous stockists. Also look out for the review in the March issue of AN.

So Anyway, while I was there I had a look at the show Pin-Up - Contemporary Collage and Drawing. The show is in the space previously occupied by the small shop at the river entrance to the gallery and feels a little cut off from the main space as you can't now get in by that entrance. Really this is no bad thing as it makes it seem like an independent gallery seperate from the great institution. A factor I suppose in staging this show which is the first in the series Untitled - Exploring New Ideas in Contemporary Art, which are dedicated to showcasing recent or new work by international artists not widely exhibited in the UK.

Pin-Up includes the work of a couple of artists who have shown at Kate McGarry - Dr Lakra and Matt Bryans. Dr Lakra has also had work at the Saatchi Gallery, so that seems fairly well exposed to me, but maybe I am being pedantic and Dr Lakra is actually my favourite in the show. He is apparently a Mexican Tatooist and his work consists of vintage magazine covers with added tatoos. They are really clever and I would look great on my wall at home. Matt Bryans is also very clever, he rubs out newspaper pictures leaving only the eyes and then puts all these scraps together to make a huge blob of discolured paper and staring eyes. It looks a little like a dark wood with creatures staring out at you - very sinister. The other stuff was less interesting but the concept is good and it is about time some contemporary art got into the Tate. 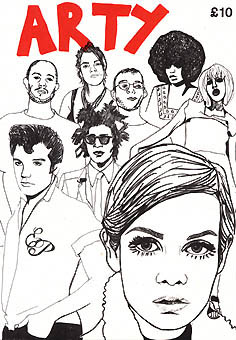