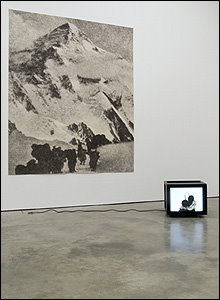 Becks Futures at The ICA

Very good this year. I like loads of it but my absolute (surprise) favourite is Seb Patane. His was the first work I saw as entered the lower gallery. It consists of a large monitor on the floor, a set of proper, big speakers, a large drawing of a mountain (which has some kind of occult connection – one of the themes of the moment) and one of his Victorian photos with ink blot type drawing obscuring part of it. The video and the soundtrack are the big hits for me. The video shows two men wearing old fashioned, Tyrolean mountain climbing gear against a white background. One of them is leaning on the other and neither of their faces is visible. Although it is ostensively a series of still images they occasionally wobble and sway with the physical effort of leaning and supporting. There is an impression of painful endurance about their performance. To accompany this there is a loud soundtrack of what I would ignorantly describe as mindless dance music but which I have since been told (thank you Russell) was Hardcore. For some reason this whole thing is ridiculously moving.

I also liked Daniel Sinsel a lot, his delicacy and precision is really gorgeous and I love the idea of painting on an eggshell.

So in agreement with all the other reviews I’ve read Beck’s Futures knocks the Tate Triennial into a cocked hat.

Oh and Seb has a solo show at Bureau in Salford until April 29th
Posted by Cathy at 11:33 am