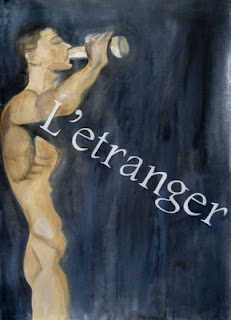 Folkestone Triennial and L'Etranger at The Lees Lift

This weekend why not take a trip down to Folkestone to catch the fantastic Folkestone Triennial. I highly recommend the works by Tacita Dean, Heather and Ivan Morison, Tracey Emin and David Batchelor (and probably lots of others which I didn't manage to see).
While you're there don't forget to take a trip on the historic Lees Lift where incidentally me and Alex Michon are showing a new work as part of Club Shepway's Folkestone Fringe programme. It's called L'Etranger and I have pasted some more details about it below.

A dishevelled young stranger arrives at a coastal town. His clothes are strange and his face is unshaven. ‘Who is he’, ‘why is he here?’ Suspicion builds and the whispering becomes feverish: ‘I hear he had to leave’, ‘her husband was after him’, ‘he’s on the run’. Speculation about the man’s history increases and ‘heartbreak’ ‘violence’, and ‘murder’ are evoked. In the absence of evidence a conclusion is reached… Silently the man disappears.


L'Etranger is about difference. It’s about fear of the unfamiliar, and the isolation of the outsider. It’s about how we make assumptions and invent our own stories. It’s about repeated fictions becoming fact. It’s about finding a scapegoat and getting away with it. It’s about disappearing and leaving questions unanswered.

But above all, at this time of political unease, intrigue and economic uncertainty L'Etranger warns against the danger of moral certitude.


With many thanks to Peter Grimes, Young Adam and The Outsider