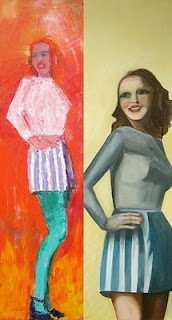 
Somewhere between painterly genetic engineering and uncanny gothic experiment, The Image Duplicator features two artists who have worked in isolation to produce a series of collaborative portraits.

‘What do you know about my image duplicator?’ snarls a mad scientist in one of Roy Lichtenstein’s paintings, seemingly commenting on the inability of many painters to connect with contemporary culture, and the guarded paranoia they have about their technique. The Image Duplicator seeks to demystify and inject a new narrative into this mix. It understands that to maintain its status in contemporary art, exciting painting can no longer exist as merely a singular work on a wall it must instead be understood thorough its relationship to the world around it.

The Image Duplicator features paintings of five sets of identical twins. Each of the artists has painted one of the twins from each set on identically sized supports. The two halves of the twin partnerships will be united for the first time at the exhibition. Both the project’s conception and its means of production look at the very nature of collaborative partnerships. Including a mirroring of ‘intent’ and the importance of the artist’s hand as that of the supreme creator.

The Image Duplicator develops and continues interests that both artists have regarding ideas around the public and private gaze and working in series. Cathy Lomax’s Mary paintings consisted of eight paintings of Mary Bell, the source material for which was a faded newspaper photograph which was reworked and reconfigured over and over to produce a set of similar but different paintings; the non-mechanical reproduction of a image in an age of endless digital reproduction. Mike Bartlett’s ongoing series of paintings depicting contemporary art exhibitions, show him looking at us looking at the influential works of the day. More recently his WW2 Spain (Lost) series features paintings of a set of non-identical twins, sourced from found photographs from pre war Berlin.

Alongside the exhibition at gasp a set of small paintings of the twins will also be shown at Aspex Gallery’s ARC Resource Space. The artists will be giving at talk at Aspex on 16 October. Please contact Aspex for more information.

There will be a limited edition Image Duplicator publication to accompany the exhibitions with essays by Fran Richardson and Alex Michon.