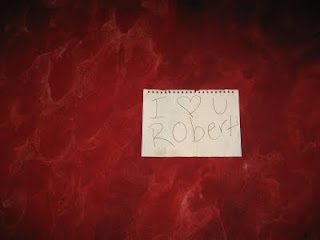 New Moon Fan Party
It was a rainy night and as anyone who has followed a 'red carpet' event will know there is often a terrible foaming up of all the old detergent that has been used to shampoo the carpet as the rain water become agitated by the guests feet. This was exactly what happened at the New Moon fan party in Battersea Park, London last week and despite the efforts of a man with a broom, spooky white footprints appeared all over the carpet. At the end of the night we spotted a forlornly abandoned sheet of paper lying amongst the footprints (maybe one of these prints was from the shoe of Rob himself... we will never know.)
Posted by Cathy at 10:39 am

I love the photo. I can't believe it's a found object. It looks like a Ruscha.

I love this photo as well - I am so glad that someone else has recognised its greatness + it really was a found object.