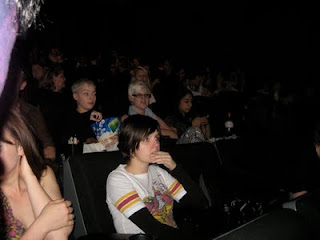 New Moon Over Battersea
I went to the opening show at the RCA's new painting department in Battersea on Thursday night. Walked from Sloane Square along the King's Road and over Albert Bridge which was very atmospheric. Lots of interesting stuff by the illustrious alumni including Laura Oldfield Ford, Emma Talbot, Paul Housley, Chantal Joffe etc etc and lost of champagne and canapes - all very impressive. I'm looking forward to the current student's Interim Show which is up next.
Then on to Leicester Square for the midnight screening of New Moon the second part of what has now been dubbed The Twilight Saga. It was a crazy scrum to get in but those teenage girls are no match for the slightly more mature woman when it comes to pushing to the front of a queue. As for the film, well... I was almost inevitably a little disappointed. It was much slicker than Twilight - lots more concentration on the composition of shots to the detriment, I felt, of character development. Also thought the film score was very cheesy while the much pushed indie soundtrack seemed almost gratuitous. As for the wardrobe all I can say is that with the exception of Kristen Stewart's Bella it was horrible and wrong - someone should get the sack. Maybe when I have watched it another five times or so I might be able to appreciate it a little better. Incidentally I really recommend Mark Kermode and Simon Mayo's review of it which is here for a few more days. Overall in the war that currently seems to be raging between the various Twilight Saga director's I'm on the side of Catherine Hardwicke (and I just saw her film Thirteen which iI really liked).
Posted by Cathy at 9:18 am

Thanks for the Mayo/Kermode link. (sorry I put my NM comment under the above post) Kermode pretty much right on I bet.
best
Corinna