Tomorrow would have been Elvis' 75th birthday. To celebrate I have been immersing myself in Elvis world. I have watched everything Elvis that has been on BBC2 and 4, listened to everything Elvis on Radio 2, flipped through all my Elvis photo books, listened to Elvis from Baby Let's Play House through to Long Black Limousine, started re reading Peter Guralnick's amazing Last Train to Memphis and yesterday I even watched a video of Jailhouse Rock.  Because of reading Last Train to Memphis I am mainly in Elvis' early years and have just moved with him from Tupelo to Memphis. I know it is hardly a new observation but it really is amazing how poor he was back then and explains so much about his over consumption in later life.

I am now looking forward to Michael Freedland's Elvis Trail programmes which are coming up on Radio 2 (by the way I am not generally a Radio 2 fan - maybe it has just got a bit better now that Terry Wogan has retired).

The pic is from the 1968 special which was on in a weird shortened form on Saturday night. Still watched it though! 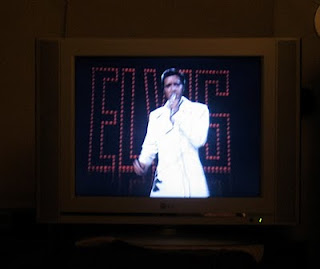 Costello is a completely different species of Elvis I'm afraid