William Eggleston and the Unreal World 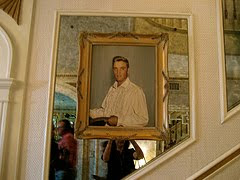 The new show at Victoria Miro is by legendary American photographer William Eggleston.

Eggleston was born in 1939 in Memphis Tennessee to a wealthy family (cotton plantation etc etc) and my favourite pieces of his work have an essence of the American south embedded within them. On the surface his compositions have a throw-away quality and if you have ever watched William Eggleston in the Real World you may wonder whether there is a touch of the emperor's new clothes about what he does - he generally only takes one shot of things he is interested in - the antithesis of the way that most photographers work.

He is very fashionable at the moment - there was a recent piece in the Guardian about all the bands who have used his images on their album covers. Of course as a resident of Memphis there must be an Elvis connection and although Eggleston apparently has no interest in the big E there inevitably is. Eggleston was commissioned to take pictures of Graceland and these were used in a Graceland guidebook in 1984 - the story is that the powers that be (probably Priscilla) were not that into the photos and the guide was withdrawn - hence it is now very collectible. The images however are still around and can be seen online and purchased in an expensive portfolio. They are archetypal Eggleston - colour saturated, throw away, hyper real and other worldly. They also look very much like any images that tourists take of Graceland (I say this because I have taken lots of photos there myself including the image above).

I sound like I am criticising Eggleston's work but I really am not - I love it. He was in attendance at the Victoria Miro's PV but unfortunately I missed him. A friend of mine who did have the honour said that he was very charming and still very much the ladies man.
Posted by Cathy at 12:10 pm