Works on paper and some merciless self promotion

It all seems to be about working on paper at the moment. I say this with some authority because I have just just read Phil Allen's interview on Articulated Artists and Emma Talbot's new 'drawing' show at Transition shows her work taking a very exciting, new direction. I also know that there is an upcoming works on paper show at the Saatchi Gallery called The Power of Paper and I find myself working more and more on paper.

It is a well documented point that a lovingly stretched and primed canvas can stymie spontaneity - it has just taken too long to prepare and the slightest wrong move could ruin its minimal perfection. Paper is cheap and disposable - it doesn't have such a weight of responsibility behind it. With this in mind last year I started working on a Film Diary series. I note down each film that I watch and then make a painting from it, naming the painting after a description of the action taking place and the date I watched the film. I wrote a bit about it way back in November and there are some images from it here. A few of these paintings are going to be in a new show at Charlie Smith called Papyrophilia which opens on 6 May and also includes Andy Warhol and Chris Ofili! The image here is one of the ones that will be in the Charlie Smith show and is called 21.08.09 He tried to look cool but felt ill at ease. 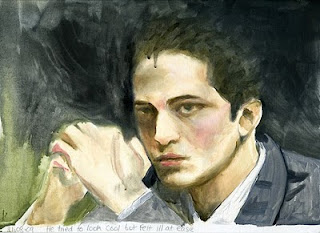 Thank you for this post Cathy, i will get to both of these. Good luck for Papyrophilia.
x
C

The thing about paper is that people then expect you to mount and frame the stuff, and what starts out as a cheap and easy strategy turns expensive and precious.

Many years ago I used to do large-scale drawings on paper, but I always got the same response at shows - "How much is it going to cost me (prospective but cheapskate collector) to have the thing framed?" (i.e. mounted and under glass/perspex).

Well when the work runs to 7 feet high and often many feet wide.... the answer is.... LOADS!

Even small works on paper end up costing loads when there are say a dozen of them (even with bulk discount from dodgy if friendly framer).

@CAP, I agree that the problem re presentation of WOPs can be expensive and this takes away the impetus for artists to explore paper as a medium. But, lately I've been encouraged to see a few galleries presenting WOPs sans framing. I like a drawing on a wall without a frame, there's something fresh and raw about it...anyway, hopefully this indicates that some establishments are encouraging people to appreciate the work, not the frame. How many times do you see awful frames around drawings? WOPs are always cheaper anyway, so it's kind of a bonus to be able to choose your own frame down the track-inconvenient as that may seem.

I'm with you on the preciousness of a lovingly prepared canvas stymieing creativity. Although I sometimes get a similar sensation when starting a new sketchbook, which is probably why I usually leave the first page blank (or at least come back to it after I'm well into the book).
I've been doing a lot more work on paper recently - especially on found paper or bits of tatty and stained pages from old books. There is something quite gratifying about working on a material that has been well thumbed or interacted with.