I went to see a sold-out screening of The Birds at the BFI last night which was followed by Tippi Hedren in conversation. The film was great - I have of course seen it before, or at least I think I have as there were some bits which I really didn't remember. I suspect that maybe I fell asleep in the middle of it on previous late-night viewings as some bits were a complete surprise. It is a shockingly brutal film, something exaggerated by the cool, calm demeanor of Hedren's character Melanie.

I had expected Tippi to be a frail old lady, but from where I was sitting at least, she looked amazingly glamorous and very recognisably the star of The Birds and Marnie. Her voice particularly was eerily identical to the one we had just heard in The Birds. She was very at ease chatting about Hitch's obsession with her, Marlon Brando's weird behaviour and the allure of Sean Connery. I must admit to being less interested in her animal saving ventures but maybe that is just me. I didn't ask any questions but if I had I would have asked what exactly happens at the end of The Birds... I've always wondered. 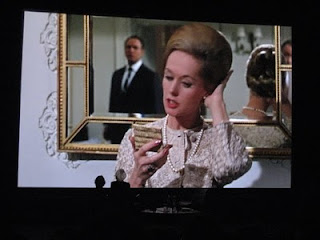 The photo is of Tippi sitting in front of the big screen which is showing a clip from A Countess from Hong Kong.
Posted by Cathy at 5:04 pm

Wished I'd been there.

I was always puzzled by the given name 'Tippi'.

Yes agree its a very strange name - can't provide any more info about it I am afraid - should have asked her!