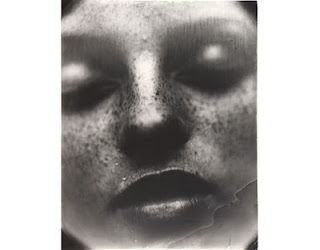 Once again I have managed to arrive at a gallery before the show starts. Went along yesterday to have a look at Sally Mann at The Photographers Gallery and... it doesn't start until tomorrow. I went all the way to Oxford to see a Tracey Emin show a while ago that didn't start until the following month. I suppose it is because when I read about something I just expect that it is on now. Also I probably want to be the first person to see it so I can show off.

I used to be really interested in Sally Mann's photography back in the 90s  - haven't seen anything of hers for a while - looks like she is showing new versions of the old work about her beautiful children (see pic above) + landscapes. Will write more when I have actually seen it.

Meanwhile there is a new show opening at Transition tonight - Michael Ajerman's Fishemen, Strawberry and Devil Crab and I have a painting in this Clash / Ray Lowry / London Calling show at the Idea Generation Gallery which also opens tonight.
Posted by Cathy at 6:44 am

Know how you feel.

So often the complaint has been that I came too soon...

I heard a review of the show at the Photographers gallery-saying that her children looked dead, and she didn't need to use real cadavers as well-I shall go and see this show -mike bartlett

I also read a review in The Observer today - she is showing the staged photos of her children but not the most controversial ones + also images of cadavers. Its all about the death of childhood don't you know.
http://www.guardian.co.uk/artanddesign/2010/jun/20/sally-mann-family-and-land-review

Actually I was with you when we went to Oxford - it was Louise Bourgeois I think we were going to see not Tracy Emin
As I remember we had a nice day anyway buying books and a nice lunch!