The new Garageland has just come out (it is unbelievably already issue no.10) and it's all about The Future. For some reason this issue took longer than any other to put together and was more expensive. Of course as per usual some pieces work better than others but overall I think it is really good and I'm hoping it will sell out just as quickly as some of the previous issues (Rock 'n' Roll for instance is now a collector's item). Highlights include a cover by the erudite and charming Mark Titchner, eco art concerns from Ackroyd & Harvey, two different angles on JG Ballard and a scathing look at futuristic fashion by Pigeons and Peacocks editor John William. My contributions are a piece called Tomorrow's Future which is a look at sci fi's future predicting and a painting of Barbarella which accompanies a film club piece about the film by our newest intern Sophia Satchell Baeza. The painting is actually from my ongoing Film Diary series and is called 10.05.10 She slept under clear plastic. The colour repro in the mag is a little strange on the painting so this seemed like a good excuse to reproduce it again here. Other recent paintings in the series are inspired by Jailhouse Rock, Far from Heaven, Top Hat, and Nowhere Boy. 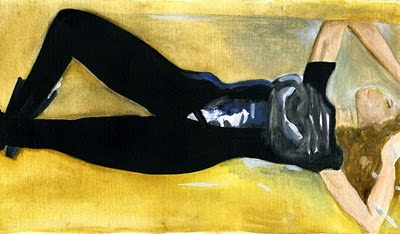