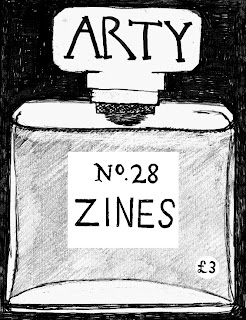 The new issue of Arty is out - very late but it has just made it into 2010. The theme is Zines - more specifically it profiles a bunch of zines and zinesters selected by the issue's contributors (I asked contributors to find a zine they liked, preferably one that they had not known before, and find out more about it). My selected zine is the wonderful Pink Mince, I was introduced to it via the Zines facebook group which I thoroughly recommend - they send out a post about a new zine everyday. Pink Mince is made by Dan Rattigan and is: 'For the confirmed bachelor of exceptional taste'. My favourite issue is from a series of spin off publications called Pink Minis and is a manifesto proposing the idea that the character played by Marlon Brando in The Wild One - Johnny - is in fact gay.

Arty ZINES is available online and in the Transition Gallery shop now and will be in all the other the shops as soon as I get out and deliver it to them (next week probably). I am also hoping to have most of the other publications that are profiled in the issue available at Transition and online very soon.
Posted by Cathy at 8:24 am