Is Kim Kardashian a feminist?

The UCL Union Debating Society invited me to take part in a debate on 12 December 2016. The motion was This house would celebrate Kim Kardashian as a feminist icon. I chose to defend the motion and here is my argument...

Kim Kardashian could easily be dismissed as yet another woman whose highly sexualised image has been cynically exploited. But instead, I would argue, she is a woman who has controlled her own image and used her body and face to promote herself as a brand on her own terms rather than becoming a victim of patriarchal society.

Back in the early 20th century the men that controlled the film industry quickly realised that images of the women who starred in their products could be used to persuade people to visit their cinemas. By Hollywood’s golden age, film studios were slick organisations, set up to fully develop and exploit the young hopefuls that were tied in to ridiculously binding contracts. In the 1954 version of the film A Star is Born  (a film that has been remade three times with a new Lady Gaga / Bradley Cooper version set to be released in 2018), Judy Garland is the ingénue who receives a studio makeover. She is given no say in the transformation process, and is made-over with an archetypal movie-star look. Her mentor, a fading star played by James Mason, laughs at her and wipes off what he deems grotesque studio makeup, before designing a new, more natural, makeup look, for her – the suggestion being that the ‘real woman’ can now shine through.

Kim Kardashian is from a new world of fame. She doesn’t need a studio she has The Kardashians, her family, her gang, her brand; a loose grouping of mostly women who support and squabble in equal parts, about divorce, gender transitions and magazine covers. 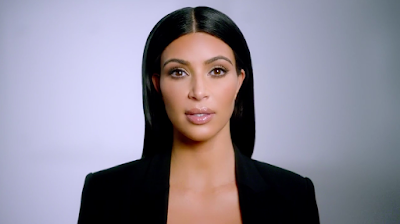 Although known for her Reality TV appearances, it is her still image that seems to me the most powerful part of her appeal. Still images, historically, are the material that fame is built upon – they are more controllable and more focussed than a moving image. The Hollywood studio chiefs knew it and employed numerous in house photographs to work with their stars, styling them in whatever way they saw fit, to produce millions of photographs to supply to fan magazines. The films were fleeting – their images flashed by. The stills lasted. Photos could be cut from the magazines and kept forever. The same is true today – photos are copied and pasted from one online site to another. The innumerable photographs of Kardashian are testament to the enduring power of the still image – we all know the naked butt shot that ‘broke the internet’.  But more interesting is the selfie, the still image bedrock of social media and a format that Kardashian is something of an expert in, as Selfish, her 445 page book of selfies, published in a new edition this year, evidences.

In the book we see Kim in her bra, Kim with Obama, Kim’s butt, Kim with her family, Kim in her contour makeup pre-blending, Kim, Kim, Kim, Kim… page after page of her emotion-free, perfected, impenetrable mask-like face. Her lipstick and hair colour may change but her face doesn’t. ‘How many pics does it take to get the perfect selfie?’ she asks on page 354 – and of course we will never know.

Many of the selected pictures deconstruct her image by showing the people who work, under her direction, on her image. So in amongst the solo selfies are pictures and captions, in faux-friend LOL style, revealing the intensive work her favourite makeup artists put into her face and how her stylists organise and repair her clothes. There is something here, which makes me think of artist Cindy Sherman and her use of her own body in her photographs – dressing herself up and down and deconstructing depictions of women from an art history which has been dominated by images of the female muse made by ‘genius’ male artists.

Laura Mulvey in her 1996 essay Pandora’s Box writes; ‘A mask-like surface enhances the concept of feminine beauty as an ‘outside’, as artifice and masquerade, which conceals danger and deception.’ Kardashian embraces the fun of the artifice; she shows her bare face, her sunburnt face, her smudged makeup swimming-face and her heavily made-up Halloween face. She refuses to hide the mechanics of the image and refuses to be shamed. Under a group of naked images, she writes ‘I wasn’t intending to put these in the book but saw them online, during the i-Cloud hack. I’m not mad at them. LOL. They are taken with a blackberry and I don’t have icloud…it’s all a mystery.’ As commentator Aimee Cliff says ‘Society wants her to quietly accept these violations and be forced out of the public eye. Instead she has become the most visible person in the world.’ (the Quietuss, 2015)

One image in the book pictures Kardashian alongside Pat McGrath, the world’s top makeup artist – a second-generation Jamaican immigrant brought up by a single mother in Northampton. And throughout the book there is a rich mix of women from different racial backgrounds. Kardashian herself is of Armenian descent and she embraces this ethnicity. Her husband and the father of her children Kanye West is an African American. This complex mixing of races is part of the KK brand and one reflected by her body shape, which is the antithesis of the skinny white female who has been an ideal for too many years.

Mid-century Hollywood stars tended to burn out young. Judy Garland succumbed to the uppers and downers of pills and booze – set on the path, so myth has it, by a studio that encouraged her to take diet pills to control her weight. Kardashian has had her own body issues. In a 2013 episode of Keeping Up with the Kardashians she talks to her sister about how the press described her as a ‘whale and a cow’ while she was pregnant with her first child. With her captive audience of around three million she, says Aimee Cliff, gets to ‘take control of the narrative of her own body’ (the Quietuss, 2015) and reveal her post pregnancy ‘hot’  (Kardashian’s word) body.

Janell Hobson in her 2016 essay Celebrity Feminism: More than a Gateway says that ‘Those of us in the academy have been conditioned to accept complicated academic prose as the only legitimate discourse’ but, she goes on to say, certain celebrities are articulating ‘critical issues pertaining to gender and its intersections with race and class for a mass audience.’ And this I believe is very important to consider.

Kardashian’s control of her own image places her at the forefront of this celebrity feminism. She may not, as a recent post on her website states, ‘label herself as a feminist’, but whether she agrees or not with the label, her image making is part of the celebrity feminist discourse. If we want to find out why she doesn’t ‘label herself a feminist’ we have to subscribe to her website at $2.99 a month. Kardashian is, I believe, being provocative in her denial of her own feminism, provocative is interesting and being interesting makes money. Some feminists may find her methods unpalatable, but she is in control and there is no denying the success of her enterprise.
Posted by Cathy at 10:54 am

Great post. Nudity with a statement!
Cheers,
John Abery
You can check out my sculpture here:
http://www.johnaberysculptor.com/