Its All Kickin' Off


By now you will have read about the controversial painting of Diana, Princess of Wales by ex stripper Stella Vine, as the story appears in every single national paper this morning (if you don't know about it I recommend waiting for the Hackney Gazette version on Thursday). It is amazing how the press works and how it is manipulated by PR companies. I have of course always realised that the newspapers / magazines need to fill their columns and will print stories handed to them on a plate but the fact that every single paper has jumped on this story because it is about
1: Saatchi
2: A stripper
3: A painting of Diana bleeding
is amazing.
This painting was in the Girl on Girl show at Transition for a month, the image was sent out to all the relevant people and there was no interest from the press, because there were two factors missing. Saatchi was not involved and Stella's previous occupation was not highlighted.

Saatchi to his credit came to the show and bought the painting and immediately hung it at County Hall. Then the publicity machine took over and it was decided that the painting had just the right combination of controversial factors to make it perfect to head the New Blood show. A show which would hopefull re inject that cutting edge factor into a collection with a jaded brit art feeling.

The Telegraph art critic Richard Dorment (who?) is quoted as saying that
the painting was the equivalent of gutter journalism. "It's trash," he said. '"It is another stab at creating the visual equivalent of tabloid journalism. Contemporary art always reflects popular culture and this is no different"

Hhum... I feel a new art movement coming on. The Tabloid School, thanks Richard. As for the rest of the press pack, maybe you should get out a bit more and look around at what's going on. Saatchi is not the only arbitor of taste and there is a lot of really exciting art going on especially in the artist run spaces in East London. You could all be there at the start of a story and not just one of the sheep.

As for Stella Vine, well she paints great paintings and is not just a one trick pony. Check out her work when New Blood opens at The Saatchi Gallery on March 20 and see more of her work later this year at Joe at Rosy Wilde and Goth Moth at Transition 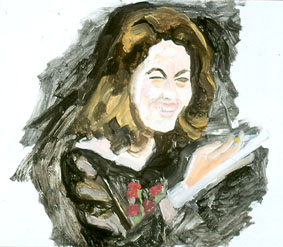 The Lodge and Tracey - Stella Vine
Posted by Cathy at 9:12 am