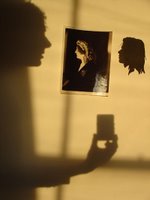 Went to see Andrew Mania's show at the weekend at Vilma Gold - it is fantastic, my absolute favourite thing of the moment. Mania's show at the Chisenhale was great but I think that this one is even better. The show is billed as a collaboration between Andrew Mania and Carl Van Vechten but is really more Mania's homage to Van Vechten who is an American photographer who died in 1964. Van Vechten's photographs have that slightly campy, aesthete, early 2oth Century look and interestingly all of the works in the show are from Mania's own collection.

So to the show... The gallery is dark and Mania has placed the photographs in little shrine like groups, some propped up on shelves, surrounded by bits of his own work and other found objects. The light that there is in the gallery is supplied by different coloured light bulbs, which are clipped on to various gallery objects. The whole show has a faded, nostalgic, decadence to it, when you leave the gallery you are left with a real sense of something that is hard to put into words, something akin to a romantic mood or a seductive smell that lingers in your nostrils.

Vilma Gold don't really give a whole lot away about the show on their site so I'm afraid that the image I've pasted in doesn't really describe the experience at all.

I first came across Andrew Mania when Annabel Dover wrote about him and how she wanted to marry him in the Our Idols issue of Arty and then again in Arty Greatest Hits, Lady Lucy named him as one of her great Bristolians.
Posted by Cathy at 6:20 pm