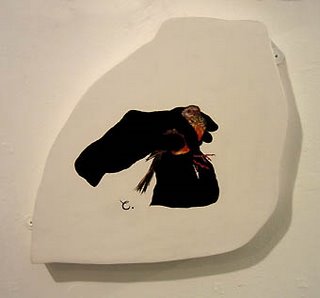 I'm invigilating today and tomorrow at Transition where we are showing the zany, Godwottery a show by Jacob Cartwight and Nick Jordan. The show is made up of a series of small pieces which are like bits of a jigsaw which don't quite fit together. My favourite pieces are Minotaur - a speaker from an old gramophone fixed on to a miking stool which croaks like a bullfrog, Edgar - a creepy black and white film about a magpie and a crane which references hanging and gallows and The Last Dream of Francois Mitterand - a triptych of paintings by Jacob Cartwright which is jam packed full of references, including stories about the little bird that appears in painting c. Jacob has sent us a whole ream of stuff about it and I am pasting in a bit below -

"When François Mitterand, the former president of France, realized that he would soon die of prostate cancer, he engaged in a stupendous act of abligurition; that is, he squandered a small fortune on a lavish and bizarre meal for himself and thirty friends. The meal included oysters, foie gras, and caviar, but the piece-de-resistance was roast ortolan, a tiny songbird that is actually illegal to consume in France. Traditionally, the two-ounce warbler is eaten whole, bones and all, while the diner leans forward over the table with a large napkin draped over his head. The napkin, according to food lore, serves two functions: it traps and concentrates the aroma of the petite dish, and it conceals the shameful exorbitance of the meal — the abliguration — from the eyes of God. In origin, the word abliguration derives from the Latin preposition ab, meaning "away," and the verb ligurire, meaning "to eat delicately." Even further back, ligurire evolved from lingere, meaning "to lick," which is also connected to cunnilingus and linguine. As for the ortolan, the tasty object of Mitterand's abliguration, its name means "gardener" in Provençal, and it derives from the Latin hortus, meaning "garden." "

There is more about Jacob and Nick in the current issue of Garageland magazine which is available at Transition, and all good bookshops!
Posted by Cathy at 1:37 pm