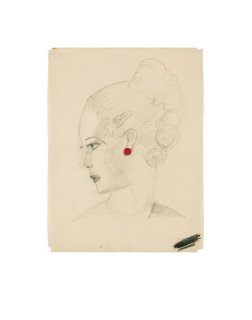 I have been to see the Tate Triennial today and it has made me very depressed. I saw the review of it on Newsnight Review on Friday night and Mark Kemode and Ekow Eshun remarked that it was impenetrable and it surely is that.

It is curated by someone outside the British art scene and although the overall theme of appropriating and reusing material is fine, the artists that she has chosen are bizarre. I have never heard of loads of them and what Cosey Fanni Tutti has to do with the current art scene I really am not sure... blah blah blah.

As far as I'm concerned London is the most exciting art producing place in the world at the moment, there is a whole new movement afoot that combines making and thinking. So why the Tate has chosen an outside curator I'm not sure and maybe because of this the show is all about that old style thinking art, that same boring old conceptual "I don't need to make any work myself its all about the ideas" stuff (yes I know there are painters in it but they are mostly so tight, there is none of that 2006 exuberance). How much more exciting would it have been to see the inclusion of artists such as Zoe Mendelson, Stella Vine, Sigrid Holmwood, Andrew Bracey etc etc.

The image I have included is from pretty much my favourite piece in the show and is by Jonathon Monk. However when you read the show notes everything is ruined when you find out that "Monk has pinned a different coloured drawing pin to the ear of each woman depicted in these anonymous portrait drawings from the 1930s, found in a flea market in Berlin. Through this simple act he attaches the work to the wall and claims another artist's work as his own, questioning notions of authenticity and authorship." - I only have one word for this - Lame - this has been said and done before so many times. He should just make some beautiful drawings himself or display these and make apparent their origins. The drawing pin authorship debate is nonsense and cliched.

I may well write a proper review for the new issue of The Critical Friend. So look out for that at The ICA etc, soon.
Posted by Cathy at 4:15 pm