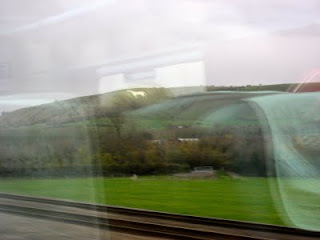 The Dark Monarch
Since I first read about The Dark Monarch and saw that Michael Bracewell was one of the curators I have been itching to get down to St Ives to see it. This weekend despite the storms and a delayed sleeper train I finally made it. There was of course the added attraction of a day long Dark Monarch symposium to entice me which turned out to be a really illuminating day full of quite unexpected eclectic stuff.
The subtitle of The Dark Monarch is Magic and Modernity in British Art and the idea is that it straddles historical practices over the last century and a number of contemporary practitioners who are re examining the supernatural, mystical and unexplained. There is also a close tie with both St Ives as a place of post war escape and the whole of West Penwith which has lots of ancient sites and links with various dark magical stuff as well as an amazing landscape. So there is work by Richard Dadd, Graham Sutherland, John Piper, John Nash and Barbara Hepworth through to Derek Jarman who is a kind of bridge between the old and new, and on to Mark Titchner, Claire Woods, Damian Hirst (a gorgeous baby unicorn with a gold horn in a gold vitrine) and Goshka Macuga (plus lots and lots of other stuff).
The symposium was held together by Michael Bracewell who participated in the panel discussions and introduced speakers and films. One of the early speakers was Chris Stephens , a curator at Tate Britain who was very knowledgeable about Neo Romanticism and St Ives Modernism.
Also speaking was Philip Hoare who recently made a great documentary about whales called The Hunt for Moby Dick based on his book Leviathan, or the Whale. He described how his whole body shook when he was echo sounded by a sperm whale (and apparently some new discoveries has shown that whales have large enough brains to be able to form their own religion).
There were a couple of artist presentations including one by Mark Titchner which I really enjoyed. He was commissioned to make a new work for the show and decided that he wanted to produce a sculpture which would actually influence the gallery surroundings. The piece he made features a zone of protection surrounded by a barrier containing vials of St John's wort and towering poles topped by orgonite pyramids (a substance which is claimed to absorb radiation).
There was also some atmospheric newly composed music and a screening of a rare film about The Incredible String Band and a q&a with its director to end the day. Afterwards I managed to have a few words with Michael Bracewell who told me that he had unsuccessfully tried to convince his fellow curators that the show should have contained an examination of the current vampire fascination but apparently they didn't go for it (incidently Bracewell wrote a great piece in the current GQ Style about Twilight and Robert Pattinson.) Maybe that is an idea for a whole other exhibition?
It is probably the best show that I have seen at Tate St Ives and I have managed to see just about all of them over the last five years or so. It's on until January so if you get the chance it is definitely worth a visit. If you can't visit (or even if you can) I also recommend the accompanying book which features most of the above mentioned people + Morrissey, Jon Savage and lots of others.
Speeding back home on the train I spotted a white horse on the hills - very apt as there is a similar looking painting of a white horse in the exhibition by Eric Ravilious.
Posted by Cathy at 1:28 pm