Following a request (see comment under recent Mixtapes post) and in the spirit of 'any excuse' I am posting a piece I wrote about one of my idols - John Peel - for a fanzine that was made by Harry Pye to accompany the show he curated called For Peel back in 2006. 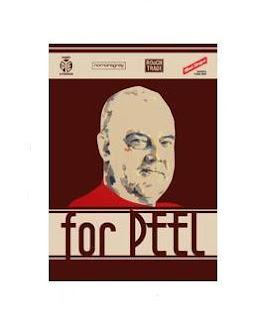 John Peel Changed my Life (every week night between 10 and 12)
As a teenager I would force myself to lie awake until I heard the final bars of the Peel show - I couldn’t bear to miss a note. One time I wrote to Peel to ask about playing a track, I received a hand written reply saying it would be coming up soon – I still have this note. I loved the Peel Show and it took me through from shy schoolgirl to lead singer.
My band was called Shoot! Dispute. We made the dutiful four track demos of our New Wave, pop, which we sent out to all the usual suspects. Finally we were asked to play the John Peel Road Show at Surrey University - I think our dodgy manager (The Weasel) pulled a few strings. So we played and although the crowd were apathetic Peelie must have liked us because to my huge excitement we were booked to do a session.
When we arrived at the subterranean Maida Vale studios I was shocked to find that John didn’t personally attend each session but our producer and engineer were ex-members of Mott the Hoople – Dale Griffin and Pete Watts, so this almost made up for it. We did three of our own songs and a cover of Iggy’s Funtime and everything went really well aside from our nervous percussion player who took a couple of his mum’s Valiums to calm himself down with the unfortunately side effect that he couldn’t keep time any more.
On 4 February 1984 we crowded into my room to listen to our Peel Session. “Shoot! Dispute, a name to remember” said John and my favourite “The first time I heard the name of the band was when my rhythm pal mentioned them to me but he had to persuade his producer Mike Hawks to book them for a session… I think Hawksy was on his way down for a bucket of Singapore Slings with the Wham boys - remember them - and actually forgot all about it. But an excellent band as I say”. Us and Peelie against the corrupt music world. We cheered, we whooped, we thought we had made it.
Further brushings with Peel included a second session and a booking to play at a music festival he curated at The ICA (supporting SPK who weren’t allowed to play by the London Fire Brigade because of their onstage blowtorches thus causing a riot). I only spoke to him once – he called me at my mum’s house to ask what we were up to – I can’t remember what I said, I was shocked that he had called me at home just like a normal person. The band eventually split - musical and personal differences - and our entire output was our Peel sessions, one single, a compilation album track and a Janis Long session.
Peelie was always looking for some indefinable quality in music, something that made you fall in love with it, a sense of excitement, a spark of commitment, a raw urgency. It is something I try to do when I look at work by artists – he has always been an absolute inspiration to me.
Cathy Lomax
Posted by Cathy at 12:07 pm

Gosh, what amazing memories to have. Thank you for sharing. He is still missed, I think.
x
C

Thanks a lot Cathy. I am, ahem, of an older generation, but still a fanatical Peelie fan. From the first time I heard his show in 1975 when I moved to London to study film at the London International (as it was then) Film School, he remained the sole beacon of what I thought exciting new music ought to be. He just played everything and anything in such entrancing combination that I was constantly questioning how I categorised these things, what I liked and didn't. My tastes didn't always coincide with his, but he definitely opened my ears and dismantled any number of prejudices, I didn't know I had. Listening to JP was always a supreme exercise in tolerance and imagination.

Like you, I learned to take this into other fields - I have virtually no musical ability whatsoever, unfortunately. But I did learn a keener appreciation of sound generally, when used in film and video. I always wished there had been an equivalent of Peelie to promote independent film making or just shorts. But Peelie was one of a kind.

Later, on graduating (well, sort of) I worked as an assistant film editor around the ITV network, and Peelie was pretty much the only constant in my life as I shuttled from B&B to B&B, in Cardiff, Bristol, Southampton, Dover, Norwich, Birmingham, Leeds, Glasgow, Belfast and Newcastle. Wherever I went I was alone, but I could always listen to Peelie in the evening on my radio.

And like you, that sense of curiosity and adventure, immediacy and directness, Peelie brought to his choices, has become something I try to bring to art, painting especially. Even to write about it, I’m always aware of the need to relax prejudices, create frameworks or locate works in ways that include rather than exclude. It’s not easy, but for me that’s been his main legacy.

Here's a piece I made with John Peel reading my text as soundtrack: http://vimeo.com/9025198

Hi Cathy
Just discovered your second session on an old John Peel tape. I remember the band name from the time but didn't remember the session - though blown away by it now! What an amazing vocal style, can't believe that Discogs shows no records for Shoot! Dispute. Power Of Persuasion is beautiful.

I too was fixated by the Peel Show at this time, and I contribute to the Peel Wikia page where we try to find and document as many of his old shows as we can.
All the best
Stuart

Cathy , I remember hearing your session on Peelie and being really impressed. The reason I came across this blog was because I was doing a shoot dispute search.... I remember taping the session on a crappy cassette player....

Hi Cathy, you or someone should set up a Wikipedia entry for "Shoot! Dispute." I consider anything with a Peel Session sufficiently notable to post an entry. There are many of us old time New Wave / Post Punk / Brit Pop / etc lovers to warrant a more extensive internet record of the band.